What price should you pay for perfection?

What price should you pay for perfection or alternatively how do you mange genius? 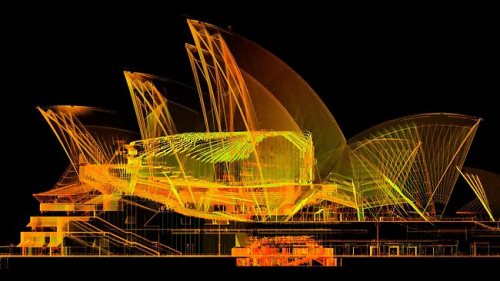 3D Scan of the building by the Scottish Ten Project

The Sydney Opera House is now over 40 years old, is the youngest cultural site to ever have been included in the World Heritage List, is the busiest performing arts centre in the world, supports more then 12,000 jobs and contributes more then $1 billion to the Australian economy each year. The fact is cost nearly 15 times the original under estimate with a final bill of $102 million pales into significance compared to the benefits it generates.

Over the years, we have written about the project and its value on numerous occasions some of the key discussions are:

What I want to focus attention on this time is the genius of Jørn Utzon and the inability of the NSW Government bureaucrats and politicians of the time to understand and appreciate the value of the work he did 50 years ago.

Utzon focused on developing partnerships with ‘best of kind’ manufacturers to prototype and test components then incorporating the best possible design into the fabric of the building. The process appeared relatively expensive in the short term (especially to bureaucrats used to contracting work to the lowest cost tenderer), but 50 years later the value of careful design and high quality craftsmanship is becoming more and more apparent.

Much of the structure was carefully designed precast concrete units, they were used extensively in the shell roofs, podium walls, sunhoods and external board walks. 50 years later the near perfect condition of the concrete despite its continuous exposure to a very hostile saline environment shows the genius of a person focused on creating a lasting landmark rather than seeking the cheapest short-term solution.

Similar longevity can be seen in the tiles that clad the shell roof, the glazed walls and most of the other work designed by Utzon (for more on this see the recently rediscovered, iconic 1968 film Autopsy On a Dream).

Contrast this clarity of vision leading to a high quality, long lasting, low overall cost outcome to the high costs of maintaining and/or replacing the elements of the building designed and installed by others after Utzon was forced to resign. The internal concert and opera halls are planned to be rebuilt at a mooted cost of between $700 million and $1 billion; and changes to Utzon’s design for the precast ‘skirts’ around the podium have resulted in $ millions more in repair costs.

The Sydney Opera House and the National Broadband Network have a lot in common. Both were inspirational schemes intended to cause a major change in culture and move society forward. Both were the subject of opportunistic political attack. Neither was well marketed to the wider stakeholder community at the time, very few understood the potential of what was being created (particularly the conservative opposition), and after a change of government both had the fundamental vision compromised to ‘save costs’ and as a result the Opera House lost much of its integrity as a performance venue with poor acoustics and an ineffective use of space.

Hopefully over the next 10 years $1 billion may solve most of the problems caused by the short sighted ‘cost savings’ in the finishing of the Opera House so it can at last achieve its full potential. The tragedy is repairing the damage done by the short term cost savings and compromises in design to appease vested interests are likely to cost 30 to 40 times the amount saved.

I’m wondering how much future telecommunication users will have to pay to drag the sub-standard NBN (National Broadband Network) we are now getting back to the levels intended in the original concept. The cost savings are focused on doing just enough to meet the needs of the 20th century such as telephony and quick movie downloads – simple things that politicians can understand. Unfortunately the damage this backward looking simplistic view will do to the opportunities to develop totally new businesses and ways of working that could have been facilitated by the original NBN concept of universal fibre to the premises will not be able to be measured for 20 to 30 years. Envisioning what might be requires a different mind set and a spark of genius.

In both the situations discussed in the blog, and when looking at the next bold concept proposed by a different ‘visionary’ the challenge will still be answering the opening question. How can businesses, bureaucracies and politicians learn to manage genius and properly assess a visionary multi-generational project to achieve the best overall outcome? There’s no easy answer to this question.