A recent 2014 scientific study, Going to Extremes – The Darwin Awards: sex differences in idiotic behaviour highlights the need for gender diversity.  The class of risk studied in this report is the idiotic risk, one that is defined as senseless risks, where the apparent payoff is negligible or non-existent, and the outcome is often extremely negative and often final. The results suggest that having an ‘all male’ or male dominated decision making group may be a source of risk in itself.

The Darwin Awards are named in honour of Charles Darwin, and commemorate those who have improved the human gene pool by removing themselves from it in an idiotic way (note the photographs are both of unsuccessful attempts to win an award).  Whilst usually awarded posthumously, (the idiot normally has to kill themselves) the 2014 The Thing Ring award shows there are other options.  Based on this invaluable record of idiotic human behaviour, the study considered the gender of the award recipients over a 20 year period (1995-2014) and found a marked sex difference in Darwin Award winners: males are significantly more likely to receive the award than females. 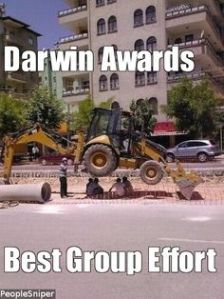 Of the 413 Darwin Award nominations in the study period, 332 were independently verified and confirmed by the Darwin Awards Committee. Of these, 14 were shared by male and female nominees (usually overly adventurous couples in compromising positions – see: La Petite Mort) leaving 318 valid cases for statistical testing. Of these 318 cases, 282 Darwin Awards were awarded to males and just 36 awards given to females. Meaning 88.7% of the idiots accepted as Darwin Award winners were male!

One well documented example is the current Federal Government. Given the extremely limited representation of women in the make-up of the current Abbott government, and some of the self-destructive decisions they have made, I’m wondering if there is a correlation. A softer, less aggressive, lower risk approach to implementing many of the policies they have failed to enact may have resulted in a very different outcome for the government.