Numerous studies have consistently shown that organisations that support overt corporate social responsibility (CSR) activities, either by allowing staff to participate in voluntary work or by donating to charities, or 100s of similar options for giving back to the wider community do better than organisations that do not. It is an established fact that organisations that embrace CSR have a better bottom line and more sustained growth, however, what has not been clear from the various studies is why!

Both of these factors have a degree of truth about them and frankly, if an organisation does not seek to maximise any competitive advantage its management are failing in their duties. However, this post is going to suggest these are welcome collateral benefits and the reason CSR is associated with high performance organisations lays much deeper.

We suggest that observable CSR is a measurable symptom of ‘good governance’. The Chartered Institute of Internal Auditors define governance in the following terms:
Governance is about direction, structure, process and control, it also is about the behaviour of the people who own and represent the organisation and the relationship that the organisation has with society. Key elements of good corporate governance therefore include honesty and integrity, transparency and openness, responsibility and accountability.

However, whilst a well governed organisation needs, and should seek to nurture this favourable reputation, it is not possible to generate a reputation directly. The organisation’s reputation is created and exists solely within the minds of its stakeholders.

As the diagram below suggests, what is needed and how it is created work in opposite directions!

What the organisation needs is a ‘favourable reputation’ because this influences stakeholder perceptions which in turn improve the stakeholder’s interaction with the organisation, particularly as customers or suppliers which has a demonstrated benefit on the cost of doing business. But an organisation cannot arbitrarily decide what its reputation will be.

An organisation’s ‘real reputation’ is not a function of advertising, it is a function of the opinions held by thousands, if not millions of individual stakeholders fed by all of the diverse interactions, communications, social media comments and other exchanges stakeholders have with other stakeholders. Through this process of communication and reflection the perception of a reputation is developed and stored in each individual’s mind. No two perceptions are likely to be exactly the same, but a valuable ‘weight of opinion’ will emerge for any organisation over time. The relevant group of stakeholders important to the business will determine for themselves if the organisation is substantially ‘good’ or ‘bad’. And because the sheer number of stakeholder-to-stakeholder interactions once an opinion is generally ‘held’, it is very difficult to change.

The art of governance is firstly to determine the reputation the organisation is seeking to establish, and then to create the framework within which management decisions and actions will facilitate the organisation’s interaction with its wider stakeholder community, consistent with the organisations communicated objectives.

Authenticity is critical and ‘actions speak louder than words’ – it does not matter how elegant the company policy is regarding its intention to be the organisation of choice, for people to work at, sacking 500 people to protect profits tells everyone:

The role of CSR within this overall framework is probably less important that the surveys suggest. Most telecommunication companies spend significant amounts on CSR but also have highly complex contracts that frequently end up costing their users substantial sums. Most people if they feel ‘ripped off’ are going to weight their personal pain well ahead of any positives from an observed CSR contribution and tell their friends about their ‘bad’ perception.

However, as already demonstrated, actions really do speak louder than words – most of an organisation’s reputation will be based on the actual experiences of a wide range of stakeholders and what they tell other stakeholders about their experiences and interactions. Starting at Board level with governance policies that focus on all of the key stakeholder constituencies including suppliers, customers, employees and the wider community is a start. Then backing up the policy with effective employment, surveillance and assurance systems to ensure the organisation generally ‘does good’ and treats all of its stakeholders well and you are well on the way. Then from within this base, CSR will tend to emerge naturally and if managed properly becomes the ‘icing on the cake’.

In short, genuine and sustained CSR is a symptom of good governance and a caring organisation that is simply ‘good to do business with’.

Unfortunately, the current focus on CSR will undoubtedly tempt organisations to treat CSR as just another form of advertising expenditure and if enough money is invested it may have a short term effect on the organisation’s reputation – but if it’s not genuine it won’t last. 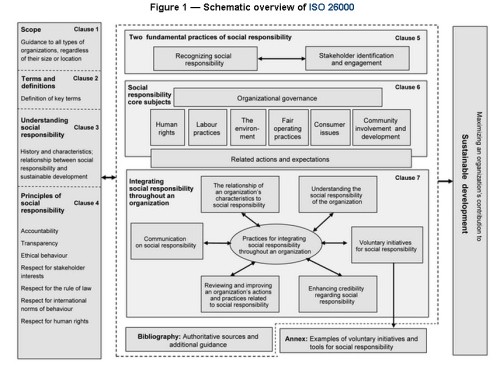 Interestingly, my view that understanding who the organisation’s stakeholders really are and engaging with them effectively is the key to success, is also seen as crucial by the standard developers! For more on stakeholder mapping see: http://www.stakeholdermapping.com

This has grown into a rather long post! But the message is simple: Effective CSR is a welcome symptom of an organisation that understands, and cares about its stakeholders and this type of organisation tends to be more successful than those that don’t!

The Central Role of Stakeholder Management

20 years ago, stakeholder management and shareholder/owner management were almost synonymous. In the intervening period, much has changed.

Most enlightened thinkers now place stakeholder management at the centre of effective business operations. The business needs to support, empower and satisfy the people working within the organisation, the general public and customers (now classes as Corporate Social Responsibility or CSR) and the owners of the business. All of these people are stakeholders.

Since the GFC effective risk management has also become of increasing concern. Risk management is not the foolish attempt to avoid all risk – this is impossible, rather the effective management of risk within the risk tolerance thresholds of key stakeholders including the organisations owners and managers; ie, stakeholders.

As summarised by the diagram above, business operations are intrinsically linked to, and require, effective governance, to meet the expectation of the organisations owners, within acceptable risk parameters to deliver value to society and the organisations clients or customers.

Once you understand this the effective management of stakeholders becomes possible. However, without the clarity of insight created by the careful analysis of the stakeholder community to determine who is really important the potential for wasted effort is enormous. As with most planning process, the payback from effort expended in analysis, is the reduced incidence of issues and problems as the work proceeds.

Can you afford not to focus some effort on effective stakeholder management?